A downloadable game for Windows

Don't let the weirdos get your fruit!

Roll the die and keep them at bay! Watch out, though, the die may not be completely on your side either!

Reply
The Bonsai Treehouse142 days ago(+2)

Pretty fun game btw, my favourite die powers were the ones that covered entire platforms like the sawblades, bear traps and horizontal lasers because if I got two dice blocks and I rolled one from both, they were extra helpful if they landed on either side of the fruit stash to take care of enemies on all sides at once.

Took a little while for me to work my head around its other quirks, but it clicked when I did. Enemies advance across the screen much more slowly than I was prepared for, running and jumping feel a bit robotic (as soon as I let go of the jump button, Marshmallow INSTANTLY falls at the same speed as when they were rising) and by the time I roll a die to get its power, the enemies will all have gathered on the OTHER side of the screen and I have to wait anxiously for it to stop and have another roll.

Some other things I had to infer a bit like throwing dice directly at enemies to stun them a bit and catching butterflies to gain a second die block for more efficient crowd control. Also interesting in a mechanical sense how getting damaged (whether by enemies or your own traps even) and getting fruit stolen both deplete the same energy bar.

Once I got comfortable though, my head was swimming with strategies and ways in which to optimise gameplay options :) 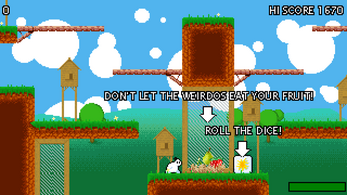 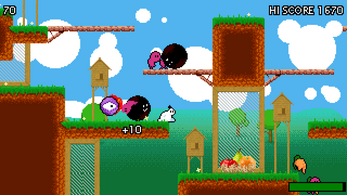 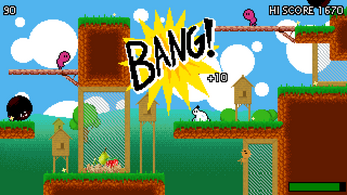